Notice: WP_Block_Type_Registry::register was called incorrectly. Block type names must contain a namespace prefix. Example: my-plugin/my-custom-block-type Please see Debugging in WordPress for more information. (This message was added in version 5.0.0.) in /home/o6y9pz8rqrwg/public_html/ethical-advisor.com/wp-includes/functions.php on line 5313
 Whose Stocks Are Better, Biden’s Or Trump’s?
Loading...
Skip to content

The U.S. presidential race created a whole new way to disagree: Biden stocks vs. Trump stocks. And ETFs now let people vote their politics with their portfolios and keep score. But should they?


A new ETF that owns roughly 50 left-leaning stocks in the S&P 500 plans to launch election week. The ETF, Democratic Political Contribution Fund (DEMZ), holds stocks where the companies and top executives donate 75% of political contributions to Democrats. The ETF is set to trade on Nov. 3.

And this new ETF squares off against the PointBridge GOP Stock Tracker (MAGA). Its trading symbol reflects the “Make America Great Again” campaign of President Donald Trump. MAGA filters S&P 500 stocks based on those companies’ and executives’ donations which are “highly supportive of Republican candidates” running for elected office. MAGA launched in 2017.

Political ETFs highlight how some investors want to align political views with their portfolios, says Jason Britton, CEO of Reflection Asset Management, the investment manager of DEMZ. “Have you thought about whether or not you’re supporting your politics … with your investment dollars, meaning your retirement, your savings, your 401(k) or your traditional brokerage account?” he said.

So, which ones are winning? Biden stocks or Trump stocks?

Biden Stocks Get A Lift From S&P 500 Technology

Holdings in DEMZ track the Democratic Political Contributions Index. That index gets its holdings from political contributions as tracked by Goods Unite Us.

And Biden stocks in the S&P 500 continue to outperform Trump stocks. The Democratic Political Contributions index returned 17.95% annualized over the past three years through Sept. 30, says S&P Dow Jones Indices. That blows away the 0.77% annualized three-year return of Point Bridge GOP in the same period, says Morningstar.

DEMZ holdings strongly tilt toward S&P 500 technology stocks. Apple (AAPL) stock, up 56% this year, is the top-performing stock in the DEMZ ETF followed by a 40% gain in Adobe (ADBE).

What’s holding back the PointBridge GOP ETF? Nearly 13% of its portfolio in energy, seen as Trump stocks, while DEMZ holds none in the struggling sector. It also puts nearly 10% in utilities, double that of DEMZ. Two top holdings are American Electric Power (AEP) and Southern (SO), which are both down this year. PointBridge GOP is down roughly 10% this year, while the S&P 500 is up roughly 2%. 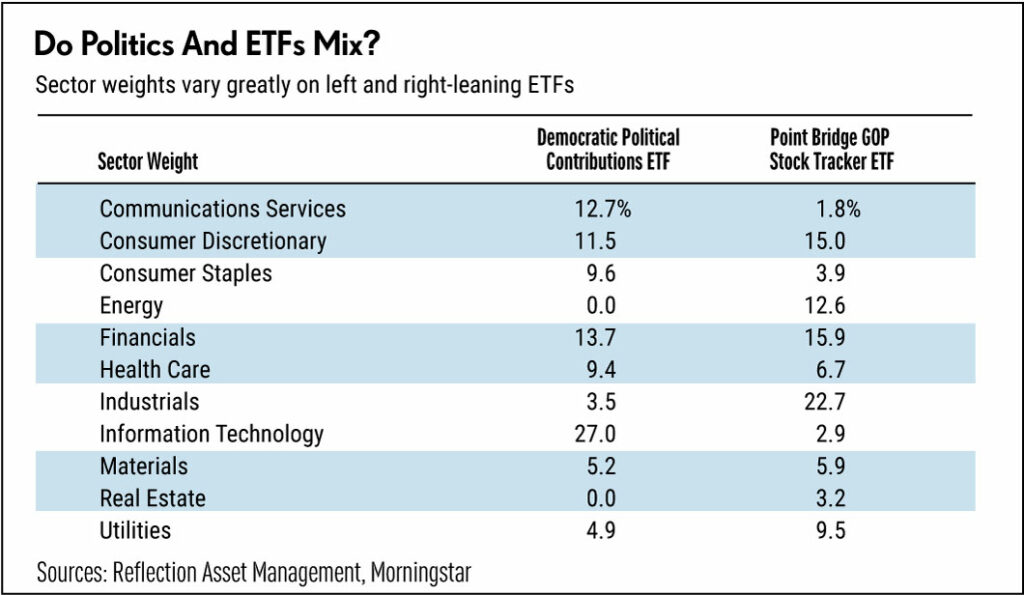 Politics and S&P 500 Portfolios May Not Mix

“I don’t think event investing is a great idea,” said Dave Nadig, chief investment officer of ETF Flows. “It implies that you … have some sort of secret edge that the entire market is missing just because of your analysis of a political system, event, or policy.”

And that’s what investors are already doing. Thematic ETFs are drawing big inflows partially on political hunches, says Todd Rosenbluth, head of ETF & Mutual Fund Research. “This is … behind the demand for clean energy and solar ETFs,” he said. “We could also see infrastructure ETFs (gain) in demand as well.”

The ETF world is harsh. If they don’t lure assets, they will vanish. “ETFs that have under $50 million in assets face great risk of closing and if Trump loses the MAGA ticker will mean less to the general public,” Rosenbluth says.

How top holdings in left and right leaning ETFs compare

Millennials Make Tons Of Money On Their New Favorite Stock

Good News Is Coming For Apple And Microsoft Stock

MarketSmith: Research, Charts, Data And Coaching All In One Place

The post Whose Stocks Are Better, Biden’s Or Trump’s? appeared first on Investor’s Business Daily.