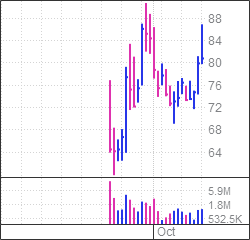 Can be as short as seven market days but usually several weeks, the IPO base is the first consolidation for a newly public company. IPO bases tend to be volatile.

Investors with an appetite for software growth stocks this summer may have been tempted to jump in when three companies — Snowflake (SNOW), Sumo Logic (SUMO) and JFrog (FROG) — launched initial public offerings. Of those three software IPOs, though, only JFrog stock has now set up near a proper entry point. That makes it the IBD Stock of the Day.

JFrog stock trades about 9% below a 90.90 buy point from its IPO base. Shares were up 0.5% to 80.60 in afternoon trades. On the other hand, Snowflake and Sumo are far from their official buy points.

The JFrog IPO raised $509 million, more than Sumo’s $326 million and less than Snowflake’s whopping $3.4 billion, the most ever by a software company.

JFrog competes in the so-called “DevOps” market. The DevOps market also produced two other recent software IPOs — Dynatrace (DT) in August 2019 and Datadog (DDOG) a month after that.

Datadog and Dynatrace are both on the IPO Leaders list. Sunnyvale, Calif.-based JFrog aims to carve out its own niche — what it calls “liquid software.”

“JFrog is often perceived as the ‘Database of DevOps’ as it has created the first end-to-end solution for managing software artifacts,” Cowen analyst Derrick Wood said in a recent note to clients. Software artifacts include a developer’s own programming code as well as byproducts produced during the development process.

JFrog stock holds a Relative Strength Rating of 87 out of a possible 99. Snowflake stock lags with an RS Rating of 32 while Sumo’s is only 14.  San Mateo, Calif.-based Snowflake continues to draw mixed reviews as more analysts initiate coverage on the provider of cloud-based data analytics software.

Find Compelling Growth Stocks With IBD’s Stock Of The Day

Get A Free Trial Of IBD Leaderboard

The post Summer Produced Big Software IPOs But Only This One Is Near Buy Point appeared first on Investor’s Business Daily.